Sleeping like a baby is an oft-used cliche. But while sleep is crucial for sick and premature babies to grow and recover, it can be difficult in a bright, noisy hospital.

However those in a specially-designed ward in Bath can be confident of getting plenty of rest.

When we try to soothe a baby at home we keep the bedroom dark and quiet. Yet many sick babies are cared for in hospital wards that are neither particularly restful, dark nor quiet.

“There’s not usually any controllable light in a hospital, it’s very brightly lit and noisy – a technical environment,” says Bernie Marden, a consultant neonatologist at the Royal United Hospital in Bath. 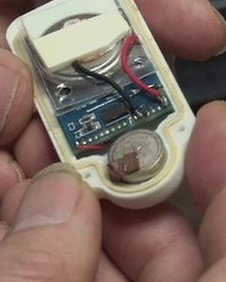 The new neonatal ward he runs has been designed with the needs of the families, babies and clinicians in mind – resulting in a fifth more sleep for the infants.

To check that the new unit provided a better environment for the babies a special movement monitor was created to record the babies’ behaviour.

The man behind the device is Professor Mark Tooley, head of medical physics at the hospital.

It is about the same size and shape as a domino and even though it is a relatively simple device, there were challenges in its design.

“We had to make sure it couldn’t get hot or interfere with the baby’s wellbeing in any way. The hospital’s ethics committee were rightly very strict about this,” he said.

It contains three accelerometers, to detect movement in three different planes and this information is fed wirelessly to a computer. The device’s battery can last up to five weeks.

Putting it under the babies’ armpit was the initial idea but the ethics committee said no.

“Putting it onto the nappy seemed the ideal solution.. but we did lose a few when nappies were changed because they were white and became almost invisible. We have now put a colourful sticker on them.”

Baby Laila and her twin sister Aicha were born nearly three months early and will stay in the neonatal unit until around their original due date.

Their mother Samantha Rhodes relaxes in a comfortable reclining chair, with Aisha cradled on her chest. 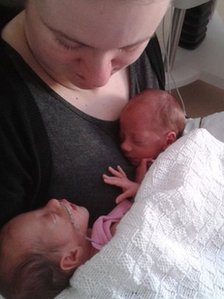 Laila and Aicha in the new unit with their mother Samantha

Both girls are now both feeding well and growing in the peaceful, dimly-lit neonatal unit.

Samantha and her daughters will be here for quite a while – probably until close to their original due date – so it is just as well they feel at home here: “It’s not like a hospital, it’s really relaxing.”

One in 10 of all babies born at this hospital will spend some time in the neonatal unit for a variety of reasons – usually because they are premature or the stress of birth.

Bernie Marden says: “In the new unit we have noticed that materials like wood have encouraged a calming environment – the families tend to tone down their voices.

“In the babies we studied we found that they had 20% more sleep here in the new unit – and while they’re resting they’re growing, and recovering.

“There is a slightly noisier time during the morning but after then it quietens down again. The overall noise level dipped by eight decibels, compared with the old unit. And the parents are more involved in their care.”

The architects behind the new unit – Fielden Clegg Bradley Studios – had never built a healthcare facility before. 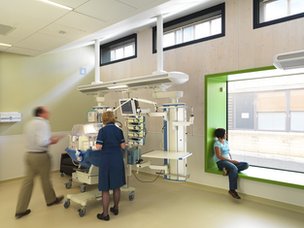 The calm atmosphere in the unit was created by consulting with everyone from the lead doctors to the cleaners.

Jo Wright, who was in charge of the project, said: “In the old unit space was very tight, everyone was on top of each other. We didn’t want to go the tried-and-tested route.

“The use of natural materials like wood came out of a desire to be sustainable. We obviously had to verify it was OK with the infection control team.

“Much of it came as a flatpack and minimised disruption as we were building close to the delivery suite.”

The impact of the new neonatal unit was evaluated by Mike Osborn – a clinical psychologist at the hospital who specialises in supporting patients affected by chronic pain and cancer.

“The old unit had no natural light – it was like being inside a hot, dusty submarine, you couldn’t tell if it was day or night.

“And because babies are small there was a feeling that the department could be small, but it was difficult for the mums to get to their babies it was so cramped.”

The parents appear to benefit also from the light and space in the new unit – the bar stools they used to sit on have been replaced with reclining comfortable chairs.

“I used to get called down to parents in a panic – as if they’d had 17 espresso coffees. Now they’re less anxious and tense and I sometimes have to wake them up to talk to them.”

Breastfeeding rates have gone up – in the new unit 90% of the babies go home breastfeeding, compared with 64% in the old unit.

Mike Osborn says the positive experience in the neonatal unit has provided a blueprint for the rest of his hospital: “We are hoping to rebuild our cancer department and now we have a benchmark for building compassionate environments here and elsewhere.

“Treatments can be horrible but we can do something to soothe our patients.”

Exercise builds up the required strength & energy to keep your heart

The Hand that Rocks the Cradle Rules the World. It’s a different

Health benefits of Oats: – High in soluable fiber – Good for