Doctors at Great Ormond Street Hospital in London are aiming to reconstruct people’s faces with stem cells taken from their fat.

The team has grown cartilage in the laboratory and believe it could be used to rebuild ears and noses.

They say the technique, published in the journal Nanomedicine, could revolutionise care.

Experts said there was some way to go, but it had the potential to be “transformative”.

The doctors want to treat conditions like microtia, that results in the ear failing to develop properly and can be missing or malformed.

At the moment, children have cartilage taken from their ribs, which is then delicately sculpted by surgeons to resemble an ear and implanted into the child.

It requires multiple operations, leaves permanent scarring on the chest and the rib cartilage never recovers.

The team envisage an alternative – a tiny sample of fat would be taken from the child and stem cells would be extracted and grown from it.

An ear-shaped “scaffold” would be placed in the stem cell broth so the cells would take on the desired shape and structure. And chemicals would be used to persuade the stem cells to transform into cartilage cells.

This could then be implanted beneath the skin to give the child an ear shape.

The researchers have been able to create the cartilage in the scaffold, but safety testing is needed before they could be used in patients.

One of the researchers, Dr Patrizia Ferretti, told the BBC: “It is really exciting to have the sort of cells that are not tumourogenic, that can go back into the same patient so we don’t have the problem of immunosuppression and can do the job you want them to do.

“It would be the Holy Grail to do this procedure through a single surgery, so decreasing enormously the stress for the children and having a structure that hopefully will be growing as the child grows.” 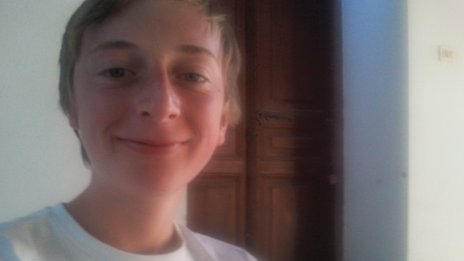 Samuel Clompus before the operation to rebuild his ear

The technique could help patients like 15-year old Samuel Clompus, who has had the reconstructive ear surgery.

His mother, Sue, said the family welcomed the research.

She told the BBC: “They wouldn’t have needed to take the cartilage.

“He has a scar there now and Sam said it was the most uncomfortable bit.”

The technique could be used to create cartilage for other tissues such as the nose, which can be damaged in adults after cancer surgery.

“Obviously we are at the beginning of this, the next step will be to perfect just the choice of materials and to develop this further,” said Dr Ferretti.

Commenting on the study, Prof Martin Birchall, a surgeon at University College London, said: “If you had something that was truly regenerative, that would be transformative.”

He was involved in the first operations to give people lab-grown windpipes.

He said the fat-based technique needed more safety testing to reach that stage.

“We used [bone marrow] stem cells as they’ve been used in 10,000s of people for bone marrow transplants, fat stem cells are likely to be fine, but they haven’t got that safety record yet.”

Have you been wondering “what’s all the fuss about green tea?” Now you

– Decreases risk of total & all cause mortality – Speed recovery